Lilies of the Valley Basket

August Wilhelm Holmström for the House of Fabergé, 1896
Born in Helsinki on October 2, 1829, Holmström was the son of a master bricklayer.  Apprenticed to the German jeweler Herold in St. Petersburg, he became a journeyman in 1850 and a master in 1857.  That same year he became principal jeweler for the Fabergé company when he bought the workshop of the master goldsmith Fredrick Johan Hammarström.  Birbaum says his workshop was among the first three in the House of Fabergé, the others being those of Reimer and Kollin.  Holmström worked exclusively for Fabergé.  Bainbridge says he made the gold miniature of the cruiser in Memory of the Azov that was the surprise in the 1891 Tsar Imperial Easter egg.  The 1892 Tsar Imperial Diamond Trellis Egg bears his mark.
It was in Holmström's workshop that the famous Fabergé miniature copies of the Imperial regalia were executed.  These one- to ten-scale miniatures were exhibited at the 1900 Exhibition Internationale Universelle in Paris and are now kept in the special treasury of the Hermitage Museum called the Gold Room.  In his memoirs, Birbaum observes:
"The workshop was famous for its great precision and exquisite technique, such faultless gem-setting is not to be found even in the works by the best Paris jewelers.  It should be noted that even if some of Holmström's works are artistically somewhat inferior to those of Parisians masters, they always surpass them in technique, durability and finish."  (Fabergé and Skurlov, History of the House of  Fabergé, 1992)
The noted Lilies of the Valley Basket presented to Alexandra Fedorovna in 1896 and now in the Matilda Geddings Gray Foundation Collection in New Orleans, Louisiana, was made in Holmström's workshop.  It is illustrated as item number 76 in Hill et al., Fabergé and the Russian Master Goldsmith (1989).
Holmström had eight children.  His daughter Fanny married Knut Oskar Pihl, manager of Fabergé's Moscow jewelry shop; his daughter Hilma alina married Vasilii Zverschinskii, bookkeeper to the firm, and she worked for the firm as a designer; and his son Albert headed the workshop after August Holmström's death in 1903.  Holmström was burried in St. Petersurg, not far from the grave of Mikhail Perkhin.  Bainbridge rates him "on the very top rung of the Fabergé ladder" (Peter Carf Fabergé, 1949) 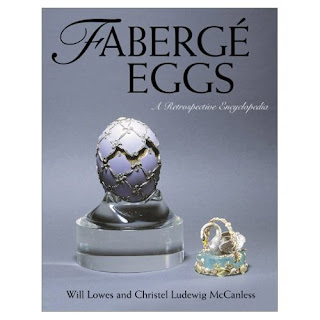