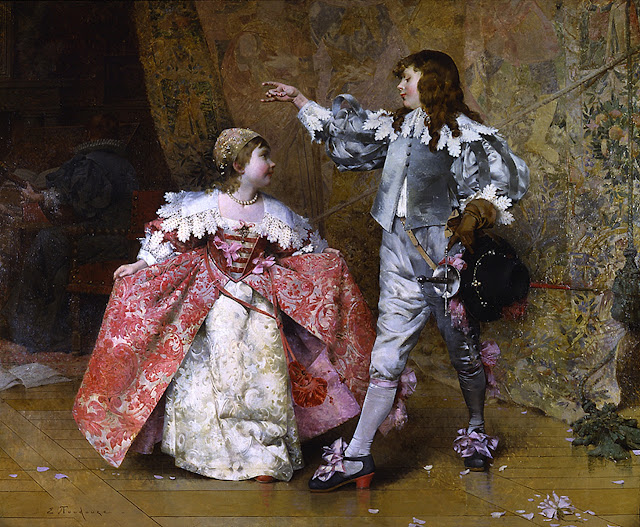 Toudouze was a narrative painter, illustrator and stage set designer, born in Paris on July 28, 1848.  He was the youngest son of Auguste Garbiel Toudouze, the French architect who was, for a time, the Chief Architect of Marsailles; and the nephew of Jean Baptiste Auguste Leloir (1809 – 1892) – the portrait and narrative painter.  At different times during his career, Édouard apprenticed in the studios of Isodore Pils, de Monticelli, and his uncle Leloir receiving advice and instruction from them.

In 1867 Édouard debuted at the Paris Salon and embarked on a strong career exhibiting throughout Europe.  Among the awards he received were the Prix de Rome, 3rd class medal in 1871 and another in 1877, a silver medal at the Universal Exposition of 1889, and was knighted with the Legion of Honor, becoming an Officer in 1903.

Édouard is credited with having done many of the popular illustrations of the time including: Woodstock, Les Adventures de Nigel, Mademoiselle de Maupin, and Chronique du regne de Charles IX.

The Gobelins acted as Toudouze’s patrons, commissioning from him a portfolio of tapestries.  Today a ten piece tapestry from this portfolio, depicting the history of Bretagne, adorns the Palais de Justice, in Rennes.  His work Le Jeu de Robin et de Marion hangs in the foyer of the Opera Comique, and as recently as 1977 a painting of his was hanging in the ballroom of the Vanderbilt Mansion in New York.