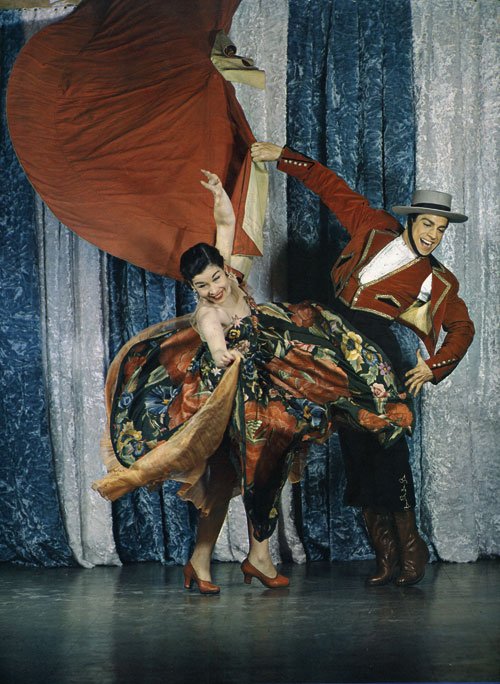 1946
Spanish dancers Rosario and Antonio began working together as children, originally appearing in public at the Liege Exposition in Belgium in 1928, when Rosario was 10 and Antonio was only seven years old! As international performers they were called "Los Chavalillos Sevillanos" by Spaniards and Latin Americans and—after their U.S. debut in 1940—"The Kids from Seville" by North Americans.
Antonio Ruiz Soler (sometimes his movie credit is given as Antonio Lopez) went on to become a celebrated star of the Andalusian Gypsy style of dance known as flamenco. After he and Rosario went their separate ways in 1952, he formed a dance company and went on to choreograph numerous works, combining folkloric with classical and modern flamenco styles, and ultimately becoming the director of the National Ballet de Espana.
Rosario was born Florencia Perez Padilla in Seville. During her long partnership with Antonio, she performed in Portugal and Andalucia, for exiles in France during the Spanish Civil War, and in Buenos Aires with Carmen Amaya's dance troupe. Antonio and Rosario developed solos to add to their repertoire after the Amaya troupe went on tour, becoming the headliners at Buenos Aires' Teatro Maravillas. They then moved on to Mexico, Cuba, and a stint at the Waldorf-Astoria in New York.
The dancers appeared at Carnegie Hall and even recorded a collection of Songs and Dances of Andalucia for Decca Records in 1942.
Rosario created dances too, including a series to the coplas of the poet Garcia Lorca. Not long before her professional separation from Antonio, Rosario made a film with him in Madrid and also danced "El Puerto" from the Suite Iberia by Albeniz. Her own experience as a manager of dance groups was a bit rockier than Antonio's, but she continued to perform around the world, reuniting from time to time with her former partner.
Rosario's and Antonio's great talents as choreographers and dancers are in evidence in the fiery precision of the dance they perform with Carmen Cavallaro and his Orchestra in Hollywood Canteen. Beating impossibly fast rhythms with their heels and toes and striking dramatic attitudes, they gaze at each other intensely and prove that the formal and disciplined flamenco is at the same time an incredibly sensual dance. At times he seems like a proud matador moving swiftly aside to make way for her advances, though her swirling grace scarcely brings to mind a bull!
In addition to Hollywood Canteen, the film credits of Rosario and Antonio include Ziegfeld Girl, Sing Another Chorus, and Pan-Americana.
➔ RetroSpective Magazine ~ Dancing at the Canteen by Chris Bamberger
➔ Hollywood Canteen (1944)