Early in the Mornin' 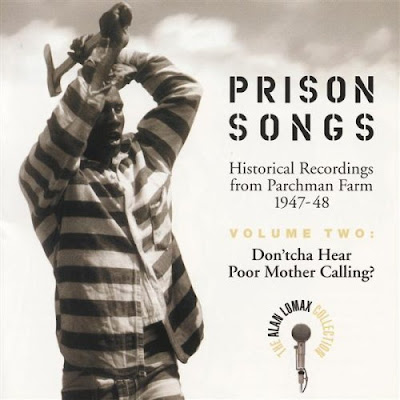 These two CDs, which consist of recordings made, mainly in 1947, by Alan at the Mississippi State Penitentiary at Parchman Farm, were among the first released as part of The Alan Lomax Collection about five years ago. It is not surprising that they were accorded priority, given the emotional quality and power of the performances.
The first of the two discs presents the material issued on LP by Tradition in the USA and by Pye in the UK in the late 1950s, but the original record title Murderers' Home has been replaced by the politically correct Murderous Home. Actuallyboth
titles are accurate enough: the vicious treatment of inmates by sadistic guards did result in deaths as well as misery, while some of the inmates were self-confessed killers and, in any case, "The Murderer's Home" was their own name for the place (the phrase appears in the first song on Volume I).
Anyway, it's good to have such classic performances as "Old Alabama", "Rosie", "Early in the Mornin"', "Stackerlee" and the amazing "Tangle Eye Blues" available again on CD (myoid vinyl copy is decidedly worn by now), and even better to have
another hour's worth of material that didn't make it on to LP. Many of the singers on the second volume are heard for the first time, although a few of the best performers on Volume I, such as Bama, Tangle Eye, and "22", do reappear. The newcomers include Dobie Red, Curry Childless, Percy Wilson, George Johnson, and "88", while the extra songs include "John Henry", "I'm Goin' Home", "Stewball", "Katy Left Memphis" and the ubiquitous "0 'Berta". Although Alan's original sleeve notes (written in
1957) are reprinted in the booklet and commentaries on the tracks (with lyrics) are provided by Matthew Barton, the difficult task of identifying the best singers by their real names rather than by their prison numbers or nicknames has been shirked. That's a pity, but these two CDs are nonetheless well worth obtaining. Indeed, this is quintessential Lomax.
Source: Sampling The Alan Lomax Collection, David Gregory
Amazon.com