Above the Latin Quarter the skies are blue; Verlaine loved those skies; Verlaine loved blue." Alas! the excuse was voted feeble, wretched—"O Bibi, Bibi!" sounded round the tables, deep sighs, groans. But Karl intervened: Bibi, he said, was not to be judged harshly on the matter of a shirt nor on the question of an umbrella. His services had blotted out such foibles —he has contributed to the joy of just men, to the idea of the "Veiled Lady." He was forgiven. But—on the morrow, the Quarter expected him to sacrifice that shirt of blue and to renew his vow of fidelity to Paul Verlaine. Husky with emotion, Bibi pledged himself to do as the Quarter ordered; and, offering his arm to the "Veiled Lady," once more led the procession round and round the cafe, among the tables, past the counter, through the door on to the Boul' Mich', now bowing, now smiling: Bibi of the Rive Gauche, Bibi the Bohemian, Bibi la Purée.
Twenty years in Paris: being some recollections of a literary life
Robert Harborough Sherard, 1906
I was very well acquainted for years with that extraordinary person Bibi-la-Purée. Of him it may be said that he seemed a survival of the Middle Ages. His home, had he ever had one, should have been in the Rue de la Grande Truanderie. If he had lived in the Middle Ages he would have been hanged. He had not, like Villon, the talents which appealed to a clever king and twice saved the poet's neck from the halter. Bibi-la-Purée's real name was Andre Salis, and he was very proud of the fact that he was a nephew of the Abbe Salis who gave evidence in the Tichborne trial, and who had been tutor to the real Sir Roger. He was the son of a marchand de vins in Angouleme, and so belonged to what the French call a respectable family, but for many years before his death he had cut himself adrift from all his relations, and the only remnant of his former social position consisted in an annuity of three hundred francs, which he used to draw at an insurance office four times a year. 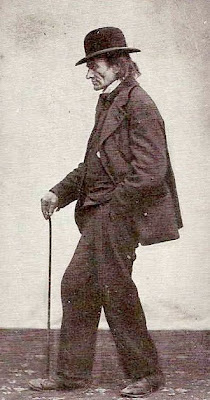