"The characters in this
picture are all fictitious.
Anyone resembling them
is better off dead." 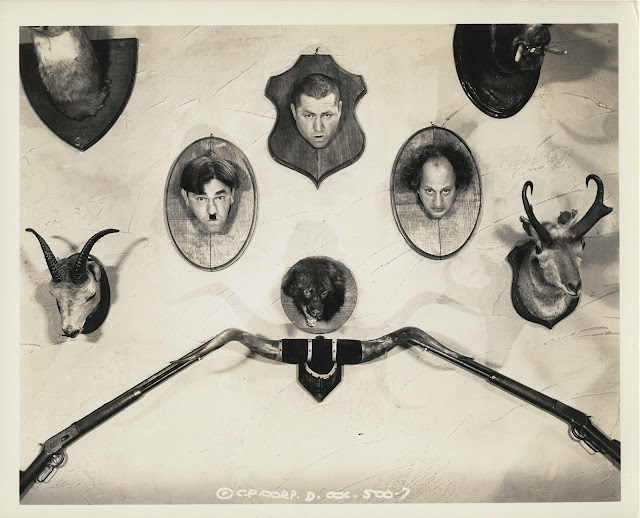 The Three Stooges, 1941
The Stooges are the same positions they were in YOU NAZTY SPY! and they are still ruling the country of Moronica. The three men of the cabinet who betrayed the king before have turned good and want to help rid of Moe Hailstone, his Field Marshall (Curly) and Minister of Propaganda (Larry). So the king's daughter is sent as a spy and she gives the Stooges a bomb that is inside a cue ball. She tricks them into believing that rulers of other countries are plotting against them, so the rulers and the Stooges play football for a world globe that Moe owns. The Stooges win and end up knocking out all of their opponents. In anger against Moe for not letting him have the globe, Curly throws the explosive cue ball on the ground and it explodes. The Stooges wind up as trophies for the king in the end.
➔ transcript


I'll Never Heil Again was a sequel to ➔ YOU NAZTY SPY! (1940) which was the first American comedy film to satirize Adolph Hitler and Nazi Germany. 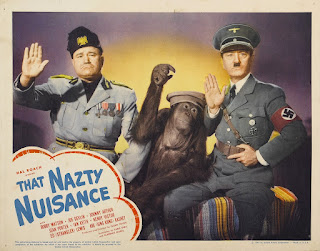 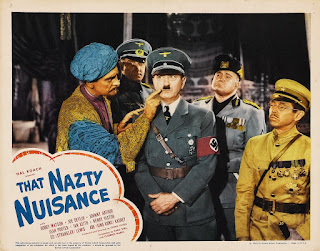 "A Dictator? Why, he makes love to beautiful women, drinks champange, enjoys life and never works. He makes speeches to the people promising them plenty, gives them nothing, then takes everything! That's a Dictator."
➔ The Three Stooges Official Website

Email ThisBlogThis!Share to TwitterShare to FacebookShare to Pinterest
Labels: Film, The Stooges