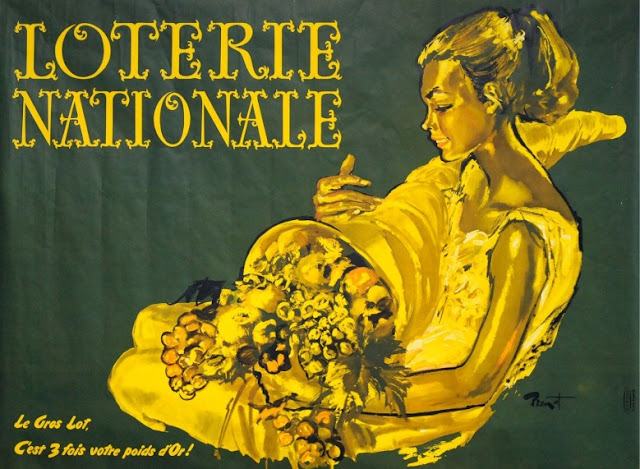 The History of the Lottery
Scholars disagree on who started the ancient tradition of lotteries, but there are references in the Bible. In Chapter 26 in the Book of Numbers, Moses used a lottery to award land west of the River Jordan.
Lotteries in the Ancient Times:
100 BC: The Hun Dynasty in China created keno. Funds raised by lotteries were used for defense, primarily to finance construction of the Great Wall of China.
100-44 BC: Forms of lotteries date back to Caesar.

Lotteries in the Medieval World:
1446: In one of the first recorded European lotteries, the widow of the Flemish painter Jan Van Eyck holds a raffle to dispose of his remaining paintings.
1465: Lotteries were held in Belgium to build chapels, almshouses, canals and port facilities.
1515: Six names were drawn for election to the Senate in Genoa, Italy; later the names were changed to numbers. The word "lottery" is believed to come from the Italian word "lotto", meaning destiny or fate.
1530: Florence, Italy held a "Number Lottery" with cash prizes.
1539: King Francis I of France authorized a lottery to replenish depleted funds in the treasury. Many of these funds had been flowing to foreign lotteries.
1567: Queen Elizabeth I establishes the first English state lottery. Prizes include cash, plate, and tapestry, with 400,000 tickets offered for sale.

Lotteries in Colonial Times:
1612: King James I of England, by royal decree, created a lottery in London. The proceeds were used to aid the first British colony in America — Jamestown, Virginia. Interestingly, Anglican churches held two of three winning tickets for the first draw.
1700s: Many of our Founding Fathers played and sponsored lotteries. Some examples:

Early Modern Lotteries:
1726: The Netherlands formed what is now the oldest lottery still in operation.
1753: A lottery is held in England for the establishment of the British Museum.
1759: At the urging of Casanova, Louis XV founded the Loterie Royale of the Military School (later on Saint-Cyr) in France. With the advent of this lottery, other lotteries were outlawed and the funds were to be used to reduce the State's debts. The King thus created a monopoly, which became the forerunner of the Loterie Nationale. The lottery was a keno-style game where players chose to bet on 1,2,3,4, or 5 numbers between 1 and 90.
1776: Lotteries were authorized to raise money for the Colonial Army.
1789: Lotteries were most active during the period following the adoption of the Constitution and prior to the establishment of effective means of local taxation and the wave of anti-lottery reform in the 1830s. Before 1790, America had only three incorporated banks. Therefore, lotteries were standard sources for public and private financing.
1790 to the Civil War: Fifty colleges, 300 schools and 200 churches were erected with lottery proceeds. Most notably, universities such as Harvard, Yale, Princeton and Columbia were funded by lotteries.
1790 to 1860: Twenty-four of the 33 states financed civic improvements such as courthouses, jails, hospitals, orphanages, and libraries through lotteries.
1817: In Lower Canada (now Quebec), a law was enacted to formally ban all types of games. The law failed due to "a taste for gaming that existed in every class."
1820 through 1878: Corruption in privately operated lotteries becomes rampant. Many award fewer prizes than advertised or award no prizes at all. Governments find themselves unable to regulate these lotteries and as a result begin to consider prohibition.
1820s: New York passed the first constitutional prohibition of lotteries in the United States.
1856: The Act Concerning Lotteries expressly forbade all types of lotteries in Canada. This Act especially affected the French and Catholic clergy, who for close to a century had financed its good works with lottery proceeds.
1878: All states except Louisiana prohibit lotteries, either by statute or in their constitution.
1890: Congress bans all lottery materials from the mail.
1895: Congress bans all lottery materials from interstate commerce.
1905: The U.S. Supreme Court reaffirmed the states' use of police powers to control gambling, effectively ending the Louisiana Lottery and other gambling in the U.S. No state was directly involved in the operation of a gambling enterprise, and lotteries were prohibited in most states by constitutional provisions for the next 60 years.

Modern Lotteries:
1912: "Totalizator" was legalized, making racetracks the only legal betting place in Canada.
1917: The Queensland State Lottery of Australia was the first lottery to start operations in the 20th century.
1930: Irish Sweepstakes were launched with great success in the American and Canadian markets because of the abolition of lotteries in these countries.
1964: The New Hampshire Legislature created the state lottery, the first legal lottery in this century; it was labeled a "Sweepstakes" and tied to horse races to avoid the 70-year-old federal anti-lottery statutes.
1967: New York became the second state to attempt a lottery.
1969: Amendments to the Criminal Code of Canada legalized gambling and gave provinces the authority to operate lottery schemes and casinos and to license charitable or religious organizations to carry out specified lottery schemes.
1970: New Jersey started a state lottery. Tickets were 50 cents for a weekly drawing. Manitoba and Quebec began the first modern Canadian lotteries.
1971: Led by New Jersey, which in its first fiscal year sold close to $73 million in tickets, lottery sales nationwide surpassed the $100 million mark for the first time.
1971: Automated Wagering implemented the world's first online system in New Jersey.
1973: The Olympic Lottery Corporation of Canada received its charter and began selling tickets to provide funding for the 1976 Olympics in Montreal. The provinces of Alberta, Ontario, New Brunswick, Newfoundland, Prince Edward Island and Quebec, as well as the Northwest Territories, participated in the Olympic Lottery.
1973: Fiscal year sales for all lotteries surpassed $500 million.
1973: Scientific Games developed the first secure instant ticket.
1974: Massachusetts offered the first scratch-off ticket.
1974: The provinces of Manitoba, Saskatchewan, Alberta and British Columbia, plus the Yukon, formed the Western Canada Lottery Corporation.
1974-76: The Interprovincial Lottery Corporation was created through an act of the Ontario Legislature, and shortly after was federally incorporated with the western provinces.
1975: Federal law was amended to allow state lotteries to advertise on radio and TV.
1975: New Jersey introduced a statewide, online network of several hundred Clerk Activated Terminals (CATs) implemented by General Instrument (now Autotote).
1976: The Delaware State Lottery began taking bets on National Football League games (called the Delaware Sports Lottery). The NFL lost a legal battle to ban this type of wagering. The Sports Lottery was abandoned after 14 weeks.
1976: Newfoundland, New Brunswick, Nova Scotia and Prince Edward Island formed the Atlantic Lottery Corporation.
1976: Lottery sales surpassed $1 billion for the first time.
1978: Both New York and Massachusetts introduced off-line lotto, a European player selection game in which the player selects six numbers between 1 and 30.
1978: Quebec joined the Interprovincial Lottery Corporation.
1979: The Atlantic provinces joined the Interprovincial Lottery Corporation, thus creating a true nationwide lottery in Canada.
1985: Tri-State Lotto, the first multi-state lottery, linked the state lotteries of Maine, New Hampshire and Vermont.
1986: The Illinois Lottery introduced the first instant game with the concept of qualifying "entry" tickets for a grand prize drawing.
1986: North Dakota becomes the first state to vote against starting a state lottery.
1988: Keno was introduced by the New York Lottery.
1988: The Multi-State Lottery Association began with Oregon, Iowa, Kansas, Rhode Island, West Virginia and the District of Columbia as initial members.
1989: South Dakota became the first state in the U.S. to license and regulate video lottery games.
1989: The Oregon Lottery began accepting bets on NFL games, later adding other professional sports teams.
1991: The Virginia Lottery awarded the first instant ticket vending machine contract.
1996: The Big Game began with Georgia, Illinois, Massachusetts, Maryland, Michigan and Virginia as initial members.
1998: The Multi-State Lottery Association recorded a world-record lottery jackpot of $295.7 million for its Powerball game.
1999: Maria Grasso of Boston wins a lump sum prize of $104 million in The Big Game, the largest prize ever won by a single individual.
1999: Thirty-seven states and the District of Columbia operate a lottery in the U.S., while lotteries are legal in all Canadian provinces and territories. More than 100 foreign lotteries exist and many have operated for centuries. Some countries, like Mexico, France and Japan, have national lotteries. The World Lottery Association lists 63 member nations — one on every continent except Antarctica.
2000: The largest lottery jackpot in history is shared by winners from Michigan and Illinois. Both winners of the May 9 Big Game drawing elect to receive cash payments of approximately $90 million as their share of the $363 million (annuity) jackpot.
2006: A new record for thee largest lottery jackpot in history is won by a lotto pool of 8 Nebraskans who will share a $365 million jackpot.

Email ThisBlogThis!Share to TwitterShare to FacebookShare to Pinterest
Labels: Recreation and Sports, Society