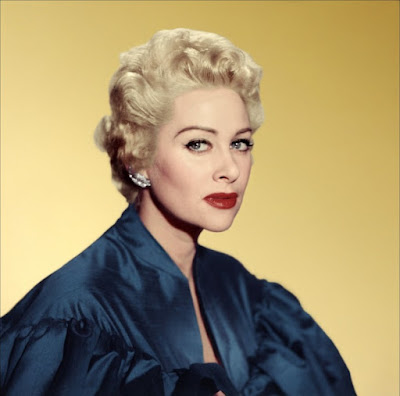 In the 1960s, Andrew Sarris declared unabashedly, “Lola Montès is in my unhumble opinion the greatest film of all time.” It seems fitting that the auteur theory’s chief proponent in English-language criticism should fix on this film in particular. For one thing, its director, Max Ophuls, had a somewhat stormy relationship with his producers; and one of the core principles of auteur criticism is that a great director will turn such practical hardships to artistic advantage. Furthermore, Ophuls was the darling of the French critics at Cahiers du cinéma (François Truffaut, Jean-Luc Godard, et al.) who proposed the politique des auteurs in the first place. While Truffaut especially railed against most commercial French films of the 1950s (collectively pilloried as the “Tradition of Quality”), he had nothing but praise for Ophuls. Truffaut wrote, “There are films that demand undivided attention. Lola Montès is one of them.”  Ironically, though, Alan Williams labels the work of Ophuls as the summit of the “Tradition of Quality”, due to its big budgets, production values and stars.

The history of Ophuls’ 1955 swan song is almost as colourful as that of its subject matter, the Irish-born dancer and actress Eliza Rosanna Gilbert (1821–1861), who used the stage name, Lola Montez. Just as there are various, often contradictory accounts of the life of this notorious celebrity mistress – whose lovers included Franz Liszt and King Ludwig I of Bavaria – numerous versions exist of the film itself. What’s more, for decades there were persistent reports of a 140-minute “original version”, which apparently never existed. Despite a recent restoration of the 116-minute German premiere version of the film, Ophuls’ son, Marcel, considers the 110-minute, second French cut (edited with the director’s cooperation) to be definitive, and it is this version that is most commonly screened today.

The idea for Lola Montés originated with its production company, Gamma Films. The producers hired best-selling novelist Cecil Saint-Laurent (a nom-de-plume of Jacques Laurent) to write the screenplay. Ultimately, though, Ophuls shot from his own script; but for the sake of name-recognition the producers included the credit, “Based on a Novel by Cecil Saint-Laurent” – despite the fact that no such novel existed. This connection to a literary source, albeit spurious, lent the project an air of prestige befitting the “Tradition of Quality”.


Similarly, the film garnered considerable clout by way of its star power. Once Martine Carol had signed onto the project, her perceived box-office bankability took the film to a new level of financing. The original, 1954 budget of 2 million deutschmarks rose to 8 million (roughly $US2 million) by 1955, making Lola Montés the most expensive European film since the end of World War II.

For directing the three versions of the film (French, German and English), Ophuls’ salary was 204,000 deutschmarks, which included a bonus for shooting in CinemaScope. (By comparison, the high-end salary for a director in West Germany in the 1950s was around 100,000 deutschmarks.)  Curiously, Ophuls was not the producers’ first choice as director. Initially they had considered Michael Powell (chiefly because of The Red Shoes, 1948), as well as Martine Carol’s husband, Christian-Jacque. Shooting ran from March to July 1955, mostly in Germany but also in France and Austria. Ophuls edited the three versions in Paris, with three different editors in different cutting rooms. He never wanted a purely French, German or English version, but rather each version was to include a mixture of languages.

What seems most remarkable about Lola Montès is the film’s striking juxtaposition of realism and high artifice. Champions of a realist film aesthetic, such as André Bazin, valorised techniques like the long take and moving camera – both hallmark’s of Ophuls’ cinematic style – as well as CinemaScope, which the director used here for the first and only time. Camille Taboulay characterises Ophuls as “the master of the melodramatic operetta, scented with quaint perfume, transcended by lyricism and spectacle…. He is an expert of the camera arabesque….”  Truffaut, who praised the film unequivocally, wrote: “If Ophuls were an Italian filmmaker, he might say, ‘I have made a neorealist film’. He has indeed given us a new kind of realism here, even if it is the poetry, above all else, that draws our attention.”

Despite its realist elements, the film achieves an almost unparalleled level of artifice and spectacle, constantly calling attention to its own synthetic construction. This is achieved primarily through the framing device of the circus – which Truffaut describes as “nightmarish and hallucinatory” – with the brilliant Peter Ustinov as our unreliable narrator/ringmaster. Martina Müller points out that Ustinov appears to be addressing the movie audience, not the virtually invisible audience in the arena; and this direct address contributes to an overall Brechtian strategy, much as we find in other Ophuls films, notably La Ronde (1950).

Hinting at this sort of Brechtian distancing, Susan White points out that,


Ophuls has often been called an ironic director because the obvious patterns of camera movements, repetitions of dialogue, and other details seem to imply a consciousness that invites us to distance ourselves from some events, pass judgment on particular characters, or reflect on an abstract “meaning” that is the result of intertextual references to other films, novels, or plays.
This reflexive approach is emphasised in the very first and last shots of the film, as we are brought into and out of the circus by way of a curtained proscenium. 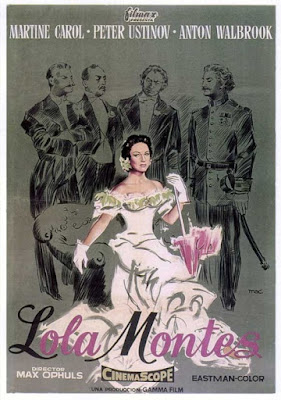 Ultimately, though, Lola Montès is sheer cinematic pleasure, and Ophuls’ inventiveness is evident in every frame. Truffaut notes that CinemaScope is “here used to the maximum of its potential for the first time,” and indeed one would be hard-pressed to find a more unusual deployment of the widescreen process than in Ophuls’ carefully crowded, overwrought framings. It is easy to see why later filmmakers as divergent as Stanley Kubrick and Jacques Demy were so heavily influenced by Ophuls’ work. We might say that, like Kubrick, Ophuls was a true “filmmaker’s filmmaker” – and Lola Montès a true cinephile’s film. © Rodney Hill, March 2006
Senses of Cinema 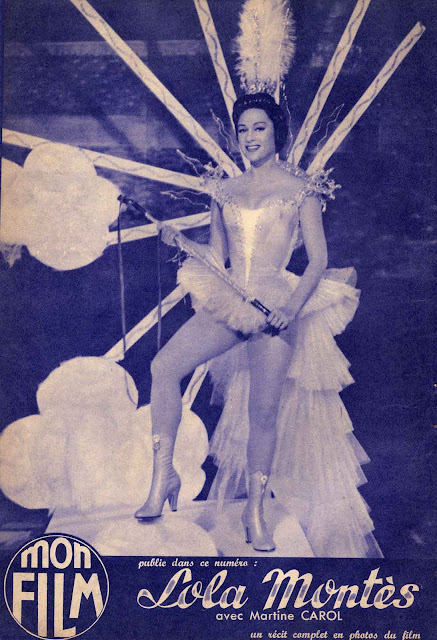 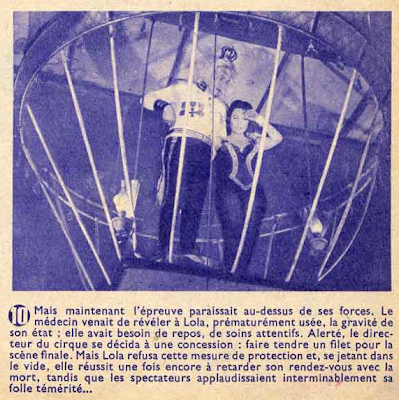