Perry, Matthew Calbraith. Narrative of the Expedition of an American Squadron to the China Seas and Japan, performed in the years 1852, 1853, and 1854, under the Command of Commodore M. C. Perry, United States Navy, by Order of the Government of the United States. Compiled from the Original Notes and Journals of Commodore Perry and his Officers, at his request, and under his supervision, by Francis L. Hawks, D.D., L.L.D. (Washington, D.C.: Published by Order of the Congress of the United States, 1856–1858). Three quarto volumes.
This now rare publication is the lavish basic official account of the Perry mission. Volume 1, published in 1856 and of greatest general interest, is extensively illustrated with fine lithographs and woodcuts, many of which are reproduced in the Essay. Volume 2 contains the colored plates of birds and marine life that are reproduced here. Volume 3, of virtually no interest today, consists entirely of astronomical charts prepared during the voyages. An abridged one-volume commercial trade edition of the Narrative was also published in 1856. This includes many of the same graphics, but the quality of reproduction is inferior to the original. 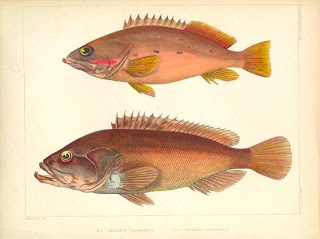 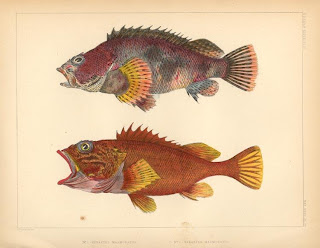 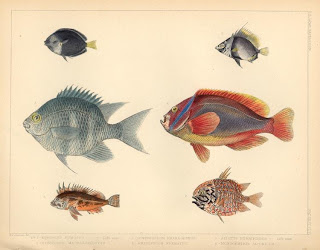 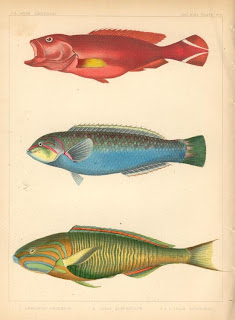 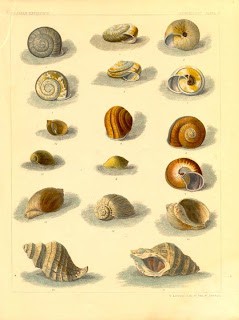 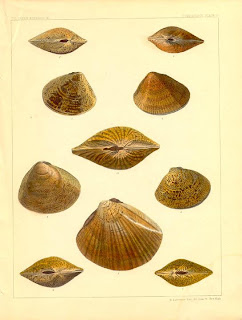 The Treaty of Kanagawa established Simoda as the city where the American consulate in Japan would be located. Commodore Matthew C. Perry visited Simoda in June 1854 and went ashore with four cannons and about three hundred men. To impress the Japanese, they staged demonstrations of artillery fire and infantry exercises on the grounds of the main temple — the scene pictured here.

Email ThisBlogThis!Share to TwitterShare to FacebookShare to Pinterest
Labels: Books